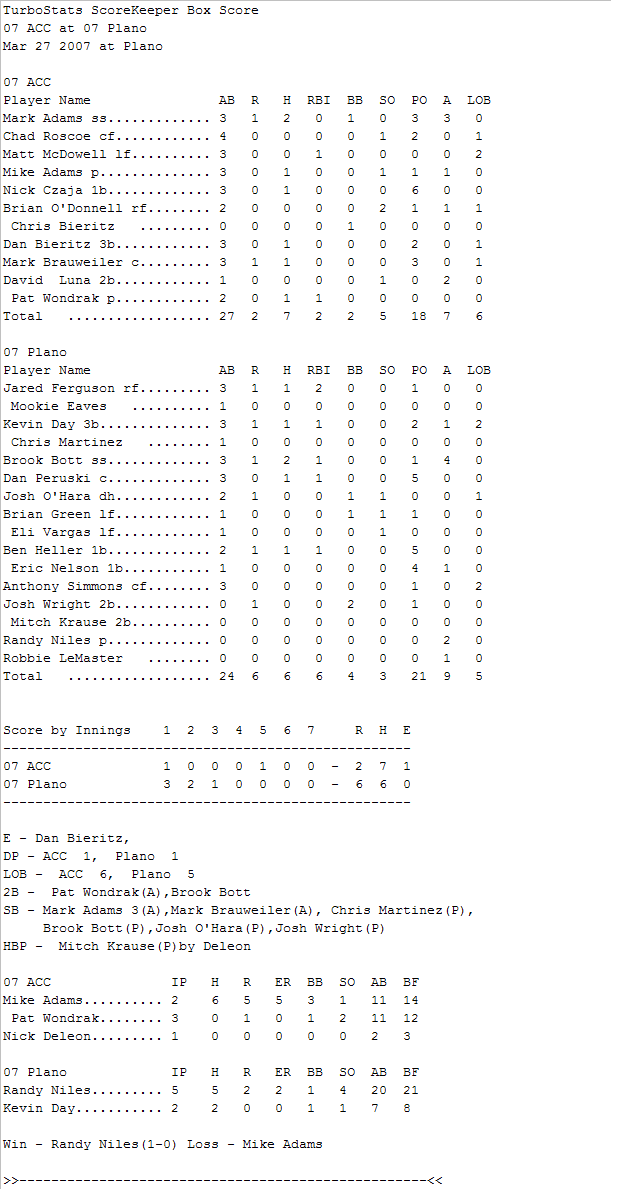 Four first-inning hits led to a 3-1 advantage and the Reapers added a pair of runs in the second stanza before claiming a 6-2 non-conference triumph.

Junior Randy Niles shrugged off a sluggish start to last five innings and Kevin Day, a sophomore, closed the door on the Chargers with two scoreless innings

Earning his first varsity victory, Niles surrendered five hits and two runs while whiffing four and walking one. He was touched for a run in the opening frame, but did not allow another score until the fifth. With a strikeout in each of the first four innings, Niles was on cruise control until the Chargers put him in a jam in the fifth.

Mark Brauweiler singled with one out and stole second base before Pat Wondrak doubled him home, trimming the Reapers lead to 6-2. And after leadoff man Mark Adams drew a base on balls, it appeared the Chargers were ready to chip away. Niles then fell behind Chad Roscoe 2-0 but managed to recover.

Roscoe popped out to second baseman Josh Wright for the second out, and Niles retired Matt McDowell on a ground ball to shortstop Brook Bott to preserve the lead. A promising rally for the Chargers (0-3) was foiled in four pitches.

"I struggled earlier in the year but worked on it this weekend," said Niles. "I was pretty much throwing fastballs and curve balls and it worked today."

"I was really happy with the way Randy pitched today," said Plano coach Jim Schmidt. "He struggled a little bit to start, but he pitched out of that first inning. He settled down in the second, third and fourth, but struggled a bit in the fifth.

"I said 'Let's end on a positive note and bring K Day in to finish it,'" Schmidt continued.

Adams opened the game with an infield single and stole second base two pitches later before stealing third with one out. Adams' speed and a fly ball by McDowell put the Chargers on the board, but Niles fanned Mike Adams to end the Chargers initial at bat.

Plano grabbed the lead quicker than the temperature dropped. Six of the Reapers first seven batters reached base, but Plano could only push three runs across the plate. Leadoff hitter Jared Ferguson reached on an infield hit and stole second before Day ripped a run scoring single to right field. Bott followed with a double into the right center gap, but was thrown out at third on relay from Brian O'Donnell to David Luna to Dan Bieritz.

Mike Adams got cleanup hitter Dan Peruski to ground out his brother Mark at shortstop, but a pair of two walks proved costly. A line drive single up the middle by Ben Heller plated Josh O'Hara and the Reapers gained a 3-1 edge. Wright led off the Reapers second frame with a walk and after a stolen base and a wild pitch he was ninety feet away from home.

Ferguson delivered a ground ball to second for a RBI and a 4-1 lead. Bott kept the inning alive with a two out single, and after he stole second and advanced to third on a wild pitch, he scored on a base hit by Peruski.

"We hit the ball really well in the first three innings, but when that cold front came in it kind of slowed us down," Schmidt explained. "Some pop ups didn't drop for us, but we didn't strikeout much. I always tell the kids to make them make the plays. And we put the ball in play."

Wondrak, a junior, relieved Adams (a sophomore) after two innings and allowed an unearned run while holding the Reapers hitless for three innings. Junior Nick Deleon tossed a scoreless sixth inning for the Chargers and assisted on a 1-6-3 double play.

With a young team, ACC coach Rich Swann knew it would be a slow start, but he also see strides already.

"(Monday) night up at Burlington (Central) we played a lot better than we did the first game," said Swann. "

We played a lot better tonight. We hit the ball better, but we had that one bad inning where we couldn't pick up the ball again. But I think we'll be OK."

The Chargers threatened in the sixth inning, but an unassisted double play by Bott thwarted ACC. Ranging to his left, Bott scooped a grounder, stepped on second for a force out and fired to first for the twin killing. Day recorded three more groundouts before Mark Adams (2 for 4, 3 stolen bases) drove a ground ball through the left side. Day ended the game with his only strikeout and handled a scorching line drive while at third base.

"Kevin has been a gem," Schmidt said. "He has the fundamentals in every aspect, between pitching, fielding and everything he does. He has the right demeanor and is one of the best kids I've ever coached. He's going to be a good one."